Over the past decade, the solar energy industry has grown exponentially. Renewable energy is going to play a large role in our society in the future, and people are already preparing for it. And, not only that but solar is becoming more affordable than ever. Plus you save even more on solar with the local and federal governments offering incentives and rebates.

So, Is Solar Worth It In AZ? 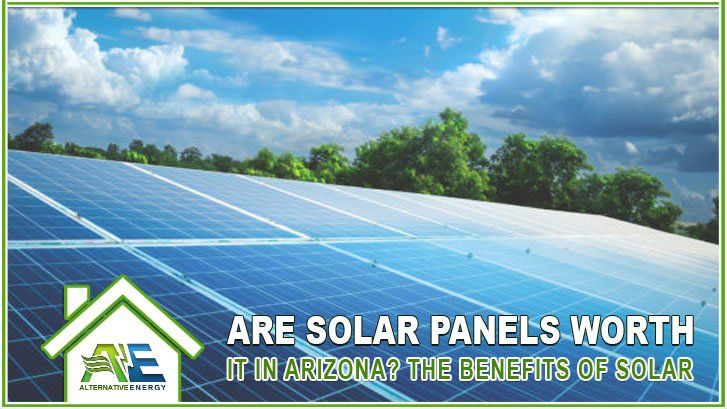 Yes, solar panels are absolutely worth it in Arizona. Solar panels can increase your home value by 2-3% in AZ, save you up to 100% on electricity, and more! Arizona has more sunny days than any other state and the federal government will take care of 30% of the cost.

Let’s take a look at the following 12 reasons why solar is absolutely worth it in AZ:

The Arizona government offers solar tax incentives to those who install solar panel systems into their home. This incentive, known as a solar energy credit, and can be worth up to 25% of the cost of the solar panel device up to $1,000.

This government credit is also good for various solar panel systems, such as cooling, lighting, and general electricity.

For those looking to cut costs, this is a perfect way to save money both from the government and through more efficient electricity usage.

Use our solar panel cost calculator to find out your solar system size, how many solar panels you need, total system cost and estimated monthly payment.

2. The Federal Government Will Give You Another 30%

That’s right! According to AZCentral.com, the government is still giving away 30% tax credit to homeowners who go solar. After this year the credit will decrease to 26%, so its best to act now to still get your 30%. Homeowners can save over $25,000 in electricity savings over 25 years.

Heating water can comprise a significant portion of your energy bill, especially during the colder months. Through solar panel installation, you’ll be able to use solar energy to heat up the water in your home.

During the winter, this means that your longer, hotter showers will have less of an impact on your energy usage.

During hotter months, you’ll see an even greater reduction in energy usage for heating water. Thus, solar energy is beneficial for more than just lights and air conditioning.

You may still be wondering “are solar panels worth it in Arizona?” One of their most recognizable benefits is…

4. Arizona Has More Sunny Days Than Any Other State 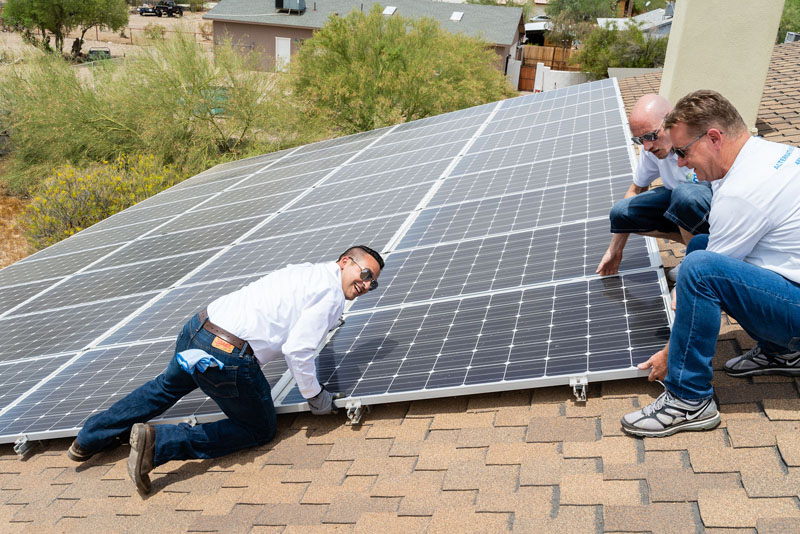 The sun is never going to run out of energy (at least not in our lifetime). Therefore, there will always be an unlimited source of power for solar panels to draw from.

Arizona has more sunny days than any other state with over 299 sunny days per year according to BestPlaces.Net.

Solar energy has a strong advantage over other forms of energy such as oil and gas, as both of those are finite. Taking advantage of solar panels now will allow you to save vast amounts of money in the future as fossil fuels become more scarce.

You can produce a ton of electricty with solar panels in Arizona. According to SolarReviews, “For each 1kw of solar panels installed on a south-facing roof in Arizona, you can expect to generate 1,752kWh per year“.

5. Arizona Has The Sunniest Cities In The US

Pollution has longterm negative effects on both local environments and the planet as a whole. Luckily, many companies and individuals alike are now choosing to reduce their carbon footprint as much as possible.

Without the use of fossil fuels, solar panel systems will provide energy that is far cleaner than that from other sources. Check out the environmental benefits of solar energy at EnergySage.

“Walmart U.S. installed 240 solar projects through 2013, saving approximately $4.8 million” says Walmart.com. It is safe to say that solar must have some kind of money saving potential or one of the biggest retailers in the world wouldn’t be planning on making the shift to every store they own. The cost of commercial solar is pretty affordable in Arizona and can save your business a ton of money.

8. The Cost to Install Solar Panels is Cheap in AZ

Because the cost to finance solar is less expensive than what you are currently paying the utility company, you will save money day 1! The average cost of solar panels in Arizona is $16,020 or $2.95 per watt. This estimated cost is based on installing an average sized 6 kW (6000 watt) solar system and before deducting the 26% Federal tax credit, 10% State tax credit, and other incentives. However, you better act fast because that percentage is going to lower again in 2021. According to RooftopSolar, “That percentage drops to 26% in 2020 then again in 2021 to 22%. In 2022, the federal tax refund will be completely phased out, so there is not going to be a better time to go solar!” Learn more about solar panel costs in Arizona.

It doesn’t cost any money out of pocket to get your solar system installed unless you are paying for your system with cash. 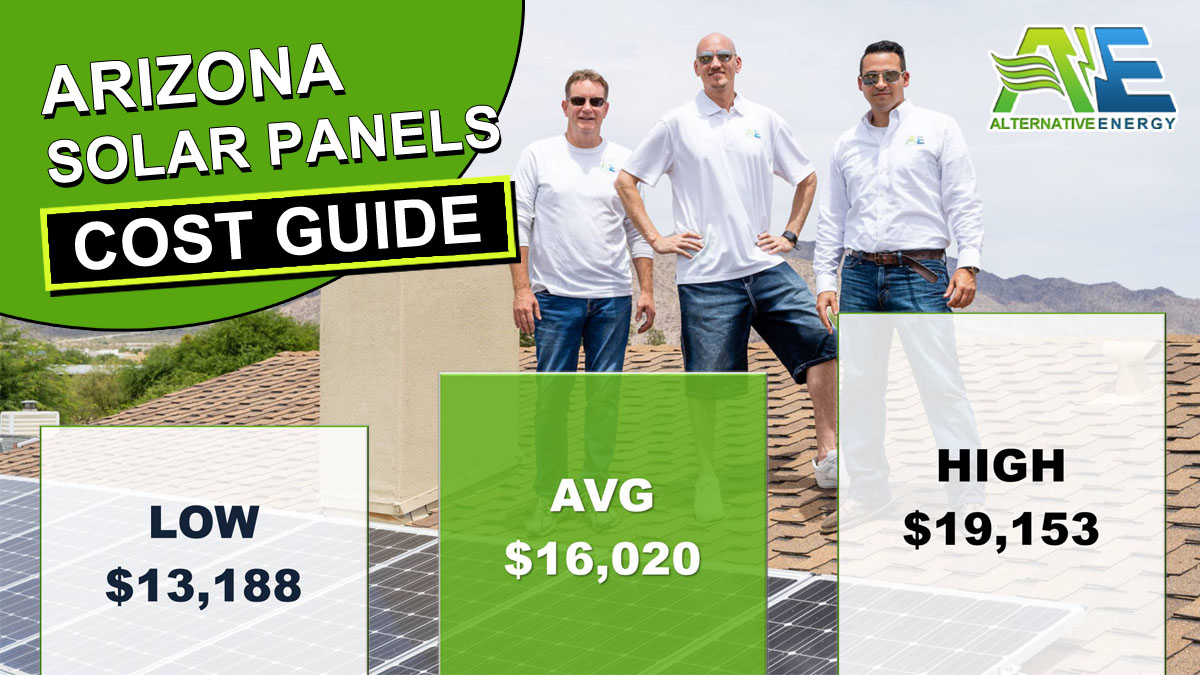 Average 8 years you will be finished paying off your solar system and will only have an average electric bill around $375 per year (Utility Fee for having solar).

9. Lock in your utility cost for the Next 25 Years

Unstable utility rates are always going up and never going down. That’s why it is more important than ever to go solar now to avoid paying even more for electricity than you are already paying.

Example: If you pay $30,000 cash, 30% of that will be a federal tax credit ($9,000 tax credit) If your tax liability is equal to or greater than  30% of your gross system cost, you will get that back in your tax refund after the first year.

11. The higher your electricity bill the higher amount you will save

Homeowners with a power bill of 250 can potentially save roughly 16,000 in the first 12 years. 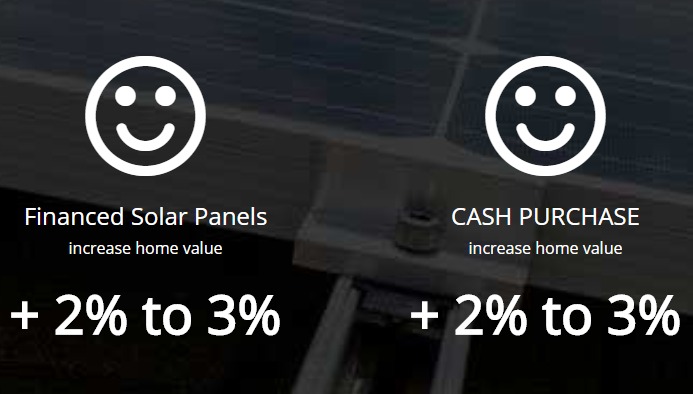 Installing solar panels can increase your home value in Arizona by 2%-3%. Homebuyers are willing to pay more for homes with Solar Panels installed on it according to Berkeley Lab (in partnership with appraisers, universities, and Sandia National Laboratories). This means AZ homebuyers are willing to pay an average of $15,000 more for a home that has received solar panel installation.

Yes. Solar Are Panels Worth it in Arizona!

Yes! Solar panels are worth it in Arizona! With long-term savings and fewer carbon emissions, solar panels will be one of the heavy hitters when it comes to energy sources in the future. Due to the high amount of sunshine Arizona experiences, it’s also a prime location for them.

But, some people may still be on the fence despite the benefits. Not sure if they’re right for you? You can learn more about solar panels on our blog.